On April 20th, 2004, The St. Francis Foundation and Labatt Breweries Newfoundland were selected last evening from a group of seven progressive employers to receive the Newfoundland and Labrador Employers’ Council’s Employer of Distinction Award. In addition the Guv’nor Inn & Pub was presented with the Path of Distinction Designation. 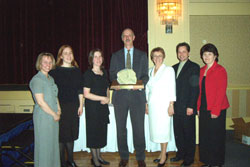 The Employer of Distinction Award recognizes employers who go above and beyond the norm when it comes to all elements of the employment relationship including Health and Safety, Compensation and Advancement, Presence in the Community, Stakeholder Awareness and the overall implementation of Human Resource Best Practices. 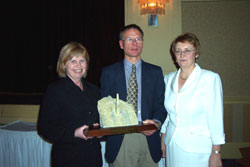 Newfoundland & Labrador Employers’ Council President Marilyn Tucker commented on the recipients, “The St. Francis Foundation has shown how an employer’s creativity can make up for the lack of a big bankroll. They have developed ways of rewarding staff that can only be described as ingenious.”

Tucker continued, “Labatt on the other hand has been able to create a corporate culture that is recognized throughout the province. When they advertise for a job they receive thousands of applications. Whatever the reason for this is, it demonstrates one thing — they are an employer people want to work for.”

The judging panel recognized the Guv’nor Inn & Pub with Path of Distinction status for their ability to create a human centered work environment. The Guv’nor has reduced turnover to astounding 5%, something unique in their industry, through a combination of employee rewards and the personalities of the owners.

The other organizations short-listed for the awards included

An independent panel of judges made the final decision.

This award is proudly sponsored by: